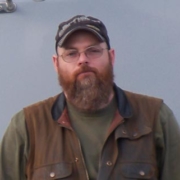 Our March Featured Driver of the Month is Steve J.!

As a kid, Steve was always impressed by the iron and steel driving down the road. As he grew up, he wanted to get out of the house and travel, so he became a truck driver.

Steve has been with Powersource Transportation for three years and he loves to haul oversize freight because it’s a challenge.

His favorite part about driving a truck for a living is that he is his own boss and he doesn’t have anyone telling him what to do.

Steve is married to his wife, Amberlee. He has four daughters: Claire, Carlee, Ashlee, and Kylee. When he’s not on the road, you’ll find him back home in Blackfoot, ID where he enjoys shooting with his girls.

Congratulations, Steve! Thanks for all that you do!